If you’re going to offer your Windows users a new application, you should also provide a graphical user interface to help them use it. Graceful error recovery and useful error messages also go a long way toward making your application easy-to-use. This post will take the Pivot Table generation script developed in Extending Pivot Table Data and turn it into a user-friendly application with an improved user experience.

The scripts developed previously could be run at the command line or by double-clicking on the icon for the script like this.

This works because the input file name, ABCDCatering.xls, is hard-coded within the script. In a corporate environment, your users have folders that contain dozens of randomly named spreadsheets. If your user accidentally provides a corrupt spreadsheet, the program should recover and continue processing the other files. The script developed in the last post needs some enhancements to make it more user-friendly, including:

To keep things concise, this version of the script only allows the user to run the program by dragging and dropping files onto the program icon. Enhancing the script to support command-line operation is left as an exercise for the reader. Let’s work through each of the usability issues below:

As I mentioned, Windows users typically don’t interact with the command prompt. Instead, programs are run by clicking on their icons, either from the desktop, a folder, or the Start menu. A user specifies spreadsheets or document files by opening them in the application or dragging them onto the program icon on the desktop or in the Explorer window.

To process multiple files, the program needs to process command-line arguments provided by the sys.argv list in a Python program. Note that the first argument, sys.argv[0], is used for the script name. In the script for this example, the runexcel function is modified to accept sys.argv as an argument.

The for loop wraps the wb = excel.Workbooks.Open(fname) call, the wb.SaveAs() call, and everything in between so each workbook is processed within the loop. After the loop finishes, the script checks for errors and issues a warning message if needed.

Adding message boxes and providing basic drag-and-drop support adds a level of familiarity for Windows users. Python supports many GUI frameworks, see http://wiki.python.org/moin/GuiProgramming for a comprehensive list. Building a complete graphic interface for this script is beyond the scope of this article, and isn’t necessary given the intent of this script. Instead, you can add support for simple message boxes using the MessageBoxA function built into Windows. The basic pattern for calling a message box using this technique is to import ctypes and call ctypes.windll.user32.MessageBoxA:

This simple code produces a message box with the text “My Message”, an OK button, and “My title” as the top banner. When Python runs the ctypes.windll.user32.MessageBoxW() statement, program execution pauses until the user clicks the OK button.

You need to bulletproof your script and guard against potential issues, both known and unknown.

Previous versions of the script made limited use of the try/except pattern to catch errors as follows:

Exceptions are now caught and handled while providing a detailed traceback.

Let’s test out the script. First, copy the script to the desktop and drag the ABCDCatering.xls spreadsheet onto the icon. Python starts running in the command window and processes the spreadsheet. If the script runs successfully, you’ll see a series of messages and the “Finished” message box. 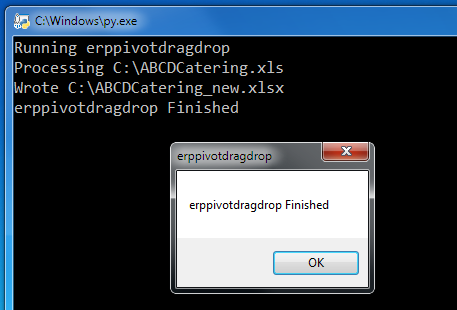 The completed script is too long to reproduce here, please view the complete script at erppivotdragdrop.py